Samuel was born last evening (Valentine's Day!) at 9:30 PM.  He entered this world weighing 10 pounds and measuring 22 inches.  Mom and son are doing well.  True to form, the delivery has a story.  But, I think the telling's best left to Katie ;-} 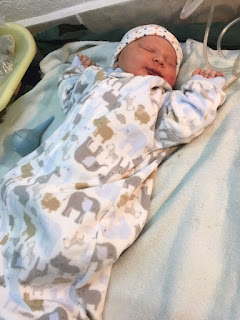 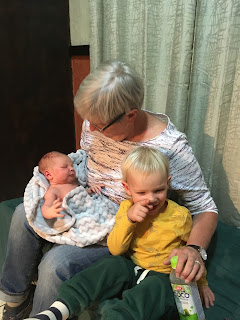 Posted by BeginAgain at 10:28 AM No comments:

Last Wednesday morning Katie and Brandon went up to the village to attend a funeral.  Charlie was with his sitter for the morning. So later,I walked to the Santa Cruz docks, hired a Tuk - Tuk and rode the steep switchback climb up to the town square. And made my way to Amigos. A vocational school, supported by ex-pats, to help create financial opportunities for the Mayan youth.  Talking with Auga and Hella upstairs (who are active supporters) the effort has also been the catalyst for measurable growth of Spanish language literacy among Santa Cruz Mayan population.  The school has programs in culinary arts / hospitality, sewing, carpentry, bicycle repair and there's talk of launching a program for digital technologies.  At the top level of building the culinary school has an open air restaurant.  Finding my way up, I met Katie, Eryne and Hugo. We were soon joined by Matthew, Nancy, Chris and Brandon.  We all enjoyed a nice lunch, great conversation and a spectacular view. 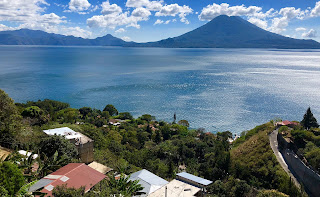 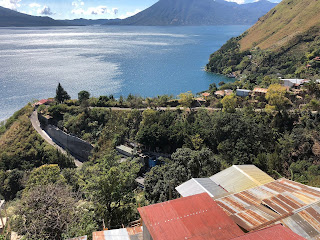 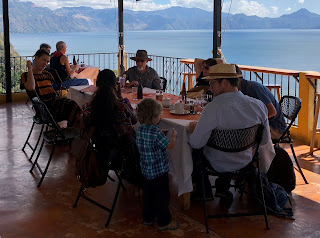 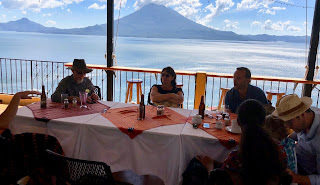 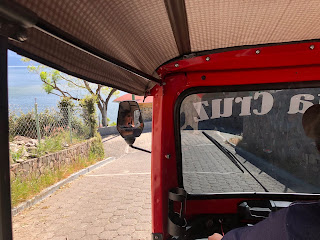 As a result of this trip, I learned how many (but unfortunately not all) local ex-pats take their responsibility as citizens of this community to heart.  Change is always slow.  But they have and clearly intend to persevere in their support and investments to help the Maya improve their community and lives.  With all the divisive bullshit happening in the "developed" world.  This experience makes one wonder where the truly developed people really are.  I think more likely - it's here.

Perseverance and generosity for the good of humanity.  Lessons to be learned.

In this one I'll try to give a sense of the main means of get around here.  I mentioned in the previous post that, at most points on the lake, the land rises (what feels like) immediately straight up from the water.  The shoreline below Santa Cruz, which includes the Norwegian Wood area, is where the bottom of a canyon - perhaps more a ravine - meets the shore.  As a result the immediate topography is sort of flat and less steep along this stretch of shore. This is where most ex-pats and snow birds around Santa Cruz have built.  The village of Santa Cruz itself sits high atop the inland end of the canyon. Katie surmises the indigenous folks knowing that over the centuries the lake level goes up and down considerably. She believes, being more in-tune with their environment,  the Mayans established themselves above the historic high water line ;-}.  Hopefully, via my description of the lay of the land,  you're able to envision how the topography along this section of shore affords space for a foot path along it.  Walking the path, I 'd guess it runs a couple miles.  All the paths here seem to be the responsibility of the landowners across who's lands the paths traverse.  I'm told, there's also situations when folks join together for major path maintenance projects.  This ad-hoc approach to civil project management - coupled with the varied terrain along the shore - creates a patchwork of styles, quality and maintenance of the area's footpaths.  If one has, or your destination is near, a dock you could hire a private boat to get you from point a to b. But, most use the path.  It can be an experience - for sure! Good shoes and sure footedness helps.  Brandon walks these paths in his flip-flops!  Must be some mountain goat in his blood ;-}.

Here's a collection of images showing the variety of path surfaces the pedestrian "enjoys". 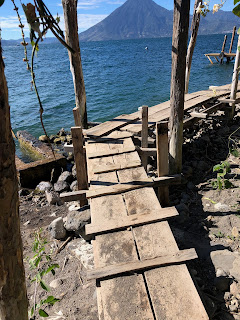 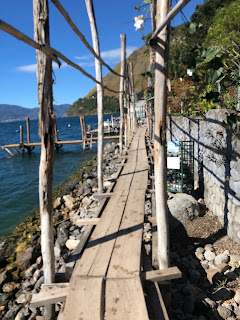 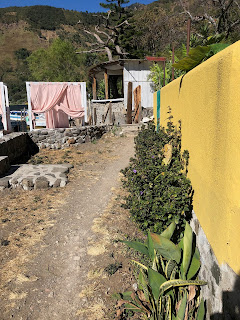 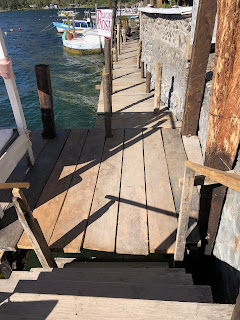 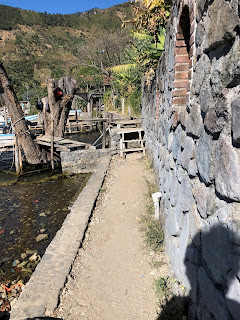 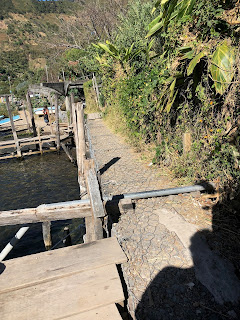 Nails are popping up everywhere on the boardwalks and docks. Makes me want to take a hammer everywhere I go.  I mentioned to Brandon perhaps screws would be the better choice of fastener.  He chuckled - "Screws are expensive.  They'd likely be repurposed."   Guess that's the way of a developing nation.

Til next time,
Tread carefully.  But - always Onward!
Jeff

Posted by BeginAgain at 11:03 AM No comments:

Wow, I've got so much to share. But, with an often wonky connection and my focus often being elsewhere, material just keeps piling up. In a previous, I'd promised to cover last week's visit with Dennis.  The shots of his house and property turned out. But images of Dennis himself didn't.  I'll try to get over to his place the next day or two, collect a few more pics and get that one posted soon.

For this post, I'm just gonna share some favorite images of Lake Atitlan. It's so freaking beautiful.  The pictures don't capture the true sense of this magical place.  But, I hope it gives you a sense of the attraction it holds for so many.  The other day, while down at the beach, Katie shared that she's concerned about having lost her sense of wonder in the beauty of this place. I get how she can begin to feel that way. What with having assimilated to the place over the past two plus years, a notable distraction called "Toon", plus the pre-occupation of another little one - soon to arrive.  But,  I'm confident the feeling will be just a temporary lapse, for her.  This place gets right into your soul.  I don't think it possible ever really lose ones connection with nor appreciation of this place. Charlie and his brother to be are extremely fortunate that Katie and Brandon have chosen Lake Atitlan and it's community for them to spend these important formative years of their lives. As a grandparent, I'm thankful for Katie and Brandons vision of how to raise their family. I get their passion for this place and its people.  And, in a huge way, I admire their courage in choosing this path.

So, I'll sign off. Lots of other great experiences to share. Hopefully the internet gods will smile and allow me to be a bit more consistent in getting the stuff on line during coming days. 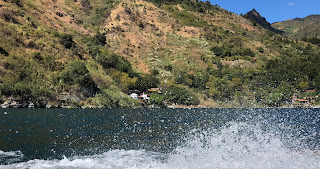 These two were shot from the boat while Katie and I were returning from San Juan (I'll have a post on that trip for you later)  It kind of gives a sense of how the topography goes completely vertical from the lake shore in most places around the lake.  Most houses and villages are perched on the hillsides. 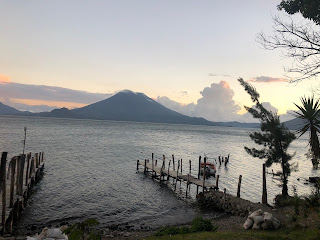 
The three above were taken Friday during our evening walk home from a pre New Year party at the given at the home of Katie and Brandon's friends Ivy and Rory and their 3 children.  All the usual suspects were there. We had a great time!

Posted by BeginAgain at 9:19 AM No comments:

Boy, keeping this up is a challenge.  I have material for one about our visit with a neighbor last Friday.  There's also stuff to cover from Saturdays lunch at the Iguana and shopping at the waterfront market just up the waterfront from here.  I'll have to get back to those later.

My first warm weather Christmas.  Doesn't seem quite right not being cold while crunching through snow.  But, I could get used to it ;-}.   Matthew, one of the friends who celebrated with us, grew up in Sydney Australia.  He shared that the "traditional" Northern Hemisphere version of Christmas is very alien to him.  Christmas is time at the beach and bar-b-ques.  So, as Mr Einstein would say - "it's all relative".

The celebrations here began Sunday - late afternoon.  The aforementioned Matthew and his partner Nancy arrived around 4 PM while I was busy cooking.  Seems Nancy was curious to see me running the kitchen?  We chatted and drank some egg nog - for which Nancy brought nutmeg nuts to grate into the drink.  With a splash of Rum (well perhaps a bit more than a splash)  it was luscious.

When in Guatemala City last Tuesday, Katie and Brandon found some very nice beef tenderloin.  While the beef roasted  in the oven,  I put together garlic smashed potatoes. With the tenderloin resting, Katie roasted some broccoli, onion and red bell peppers. And I sautéed shrimp we'd bought at the market on Saturday.

While dinner prep was in full swing, landlord / upstairs neighbor Augie joined us.  At 6 (just in time for dinner) friends Cruz, Christina and their two sons Christian and Lejandro arrived.


We dined outside on the patio. Drank some nice wines that Nancy & Matthew contributed -  a German white and some nice reds. Augie brought a couple bottles of another nice German white. A splendid time was had by all.   For dessert, Nancy made a splendid cheesecake from scratch,.  It was phenomenal.


Having (at our insistence) consumed the Lion's share of the shrimp ;-} Augie left shortly after dessert.

The rest of us took part in the traditional obligatory photo session. 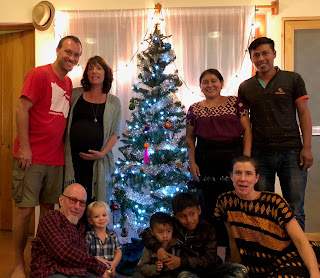 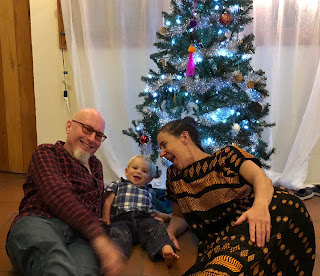 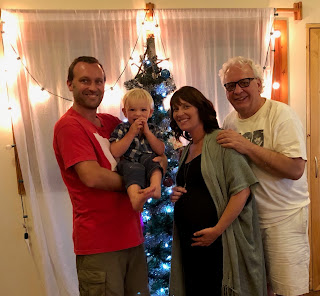 After the remaining guests made their way home, Brandon gave Charlie a bath. Then they joined Katie for she and Brandon to read a bedtime story. After good night kisses for all, Toon was off to sugar-plum faerie land.  Katie wrapped the last few of her gifts. Magically, Santa arrived just as she finished. 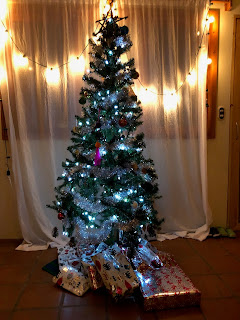 Charlie was very kind in the AM and allowed grandpa to sleep until nearly 7! 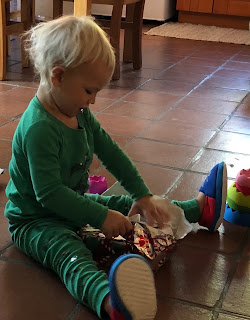 
After the wanton destruction of wrapping paper, that I'd so carefully packed and brought from the states, we had a nice breakfast. Afterward we played with all the new stuff. Great fun!

Katie and Charlie took their afternoon naps. Brandon and I watched Episode 1  / Season 2 of Amazon's Grand Tour.  Brandon wasn't familiar with the former Top Gear guys. But, I think he found it quite entertaining.

Nancy and Matthew returned around 3.  They were followed by Chris, Eryne and their 4 year old son, Hugo. Rounding out the Christmas day group were Ryan and Angela accompanied by Angela's twin daughters aged 10

Chris is a great cook. He arrived toting a fabulous ham he had roasted that day with fine glaze of home made ginger syrup.  The remainder of the glaze was served as a sauce for the ham. Chris also contributed some fantastic home-made egg nog.  Katie made from scratch stuffing and mashed sweet potatoes. Ryan and Angela contributed a nice selection of cheeses, crackers and surprisingly good beet dip, (eaten with bread). Angela also made some very light and fluffy dinner rolls.  More nice wines were contributed, Ryan was the guest mixologist and we again feasted like royalty on the patio.

After dinner, we played a game Ryan and Angela brought along  called "Catch Phrase". It's like trivial pursuit, played with an electronic "puck" that presents the challenges, keeps time and score.  High energy and lots of fun.


By the time everyone headed off for home, KBT, Kirby, Jackson and I were happy for some calm.


Hope your Christmas was as great as ours.