Charlie was born at (or around as I don’t know the exact time) 7:24pm on 1/10/16. He was born in Solola Guatemala at the Hospital Santa Teresita Misereor.  That’s correct folks; we ended up at the hospital.

This is how it all went down:

LindaBlue came for a visit on Saturday the 9th. I was having light contractions and so she gave me a homeopathic medicine to help the contractions to intensify. She left around 1pm and told me to relax at home and that she was pretty sure that she would be coming back before the last boat because she felt that I was going to have a baby that night.

Brandon and I spent the afternoon watching The Making of a Murder.  Linda was right. My contractions started to intensify and come closer together around 3pm. We called Linda and she returned to our house around 5:30pm. We had dinner together and were about to start watching The Making of a Murder again when my contractions hit me hard. This was around 6:30pm.

I labored at home for almost 24 hours. During this time I dilated to 9, fully thinned out, pooped in the shower, peed on myself, and walked around the house with no pants on. It isn’t Linda’s normal practice to do vaginal checks during labor but mine was taking so long and we all felt that it may help me mentally. She checked me twice and attempted to break my water but was unsuccessful. The water bag was behind Charlie and was difficult to get to.

Around 3pm on Sunday the 10th Linda asked me if I wanted to go to the hospital (we had already met with an Obstetrician that was on call for us as a back up should we need a hospital setting).  Linda told me that I was not in an emergency but that she could see that I was getting very tired and she did not want us to find ourselves in an emergency in the middle of the night due to our location. She told me it was my choice.

After some thought we (Brandon and I) decided that it would be the best for us to get to the hospital in the daylight. I asked my mom to go upstairs to tell our landlord of our plan to keep them informed. They contacted our Guardian Cruz who came to the house with his friend Pedro who is a boat captain. They brought a stretcher to help me down to the boat.  I could not bring myself to get on the stretcher so I walked.

I’m pretty sure I don’t have to go into detail about how terrible it was to ride across a very bumpy lake while in labor…it was rough! We made it to the dock where Cruz had an ambulance waiting for us. I was so embarrassed getting off that boat at the public dock. I was worried that I might see someone that I knew!! Come on Katie, really!

The hospital that we were supposed to go to is in Pana but when Brandon called the doctor to tell her of the situation she let him know that her operating room was being cleaned and so we would use another private hospital in Solola. This meant a very insane and painful ride up the mountain. Switch back after switch back. The driver was treating the situation as if I was dying. I was yelling obscenities and at one point begged Brandon to open the door so I could get out and walk.  Oh, yes, I almost forgot. I’m not sure how or why but we picked the doctor up in a gas station parking lot so she was in the ambulance as well.

We arrived at the hospital around 4:30pm. The doctor completed her own exam of me and she felt that I was dilated to 8. She broke my water and hooked me up to Pitocin (not something that I requested). This made my contractions so unbearable. I believe I began yelling obscenities again and now I was begging for an epidural.

The doctor, who is a trained surgeon, had a different take on my situation than LindaBlue. The doctor felt that I was in an emergency situation. She told me that she would give me 30 minutes to dilate to 9 centimeters and if I did not she would need to perform a C-section. She then told Brandon and I that if we wanted her to treat me we would need to sign a form stating that we would do whatever she recommended. At first I thought she was going to have us sign a form waiving her of any liability if we decided to not follow her recommendations. I had to ask for clarification a few times. I was in so much pain and was so afraid that if we did not sign the form that we would be standing on the street corner that I told Brandon to sign the form.

My mom was able to convince the doctor to give me 2 hours to try to make some progress but ultimately Charlie was born via C-section. The whole experience was very interesting. The doctor had so much power and I felt completely without a voice or choice. I also knew I was very vulnerable and I believe that she knew this too which just gave her more power.  I’m not saying that the C-section was not needed, it very well may have been. I simply would have liked to have had more of a voice and a collaboration between myself and the doctor.

In the end we have Charlie who is a very healthy, content, and peaceful human being.  He was 9.5 pounds and 25 inches. He was approximately 10 days past his guess date. He sleeps 4 hours through the night and we don’t wake him because he is a very healthy weight. He needed no tutorial on how to breastfeed which I am every so grateful for.

I knew that this Guatemala adventure would teach me a thing or two but I had no idea that my birth would be a part of the lesson. I have learned that I am much stronger than I thought I was. I also learned that flexibility wins over certainty.

Below are photos from my birth. They are not photo shopped and I did not have time to put my makeup on (HA!).  Be kind as I’m really putting myself out there with some of these… 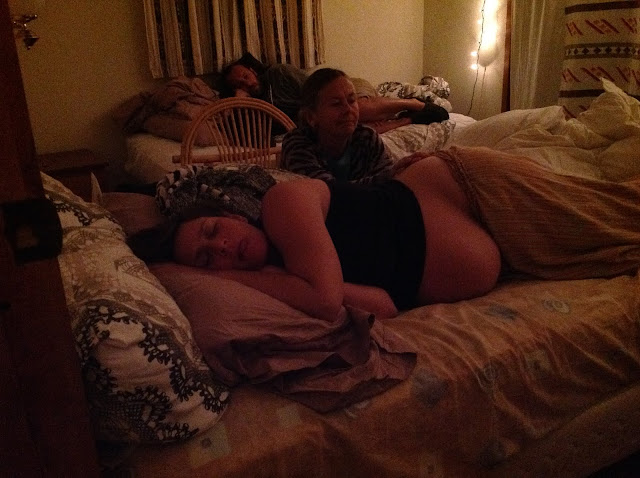 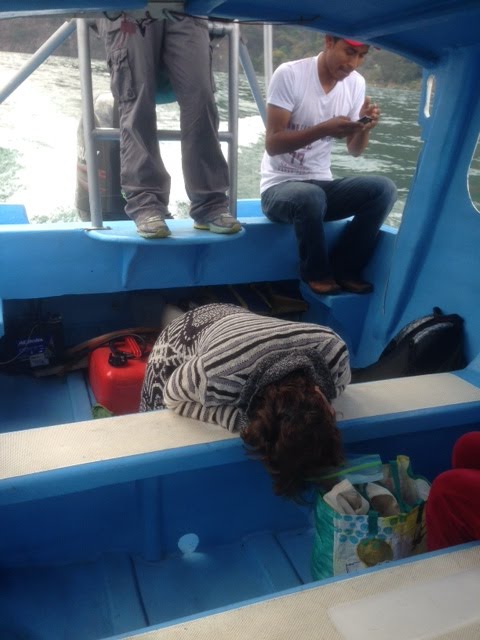 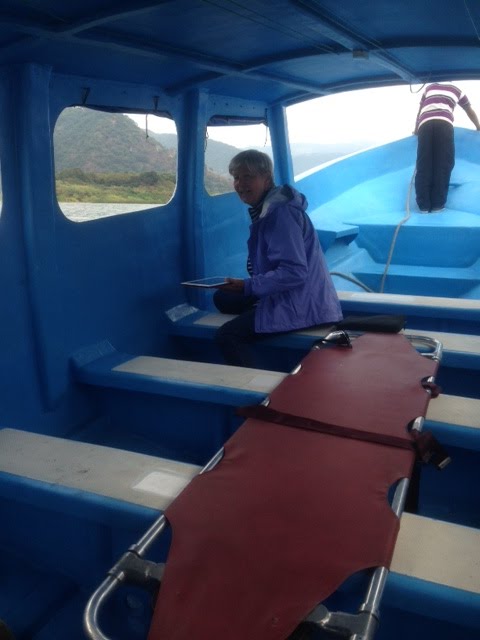 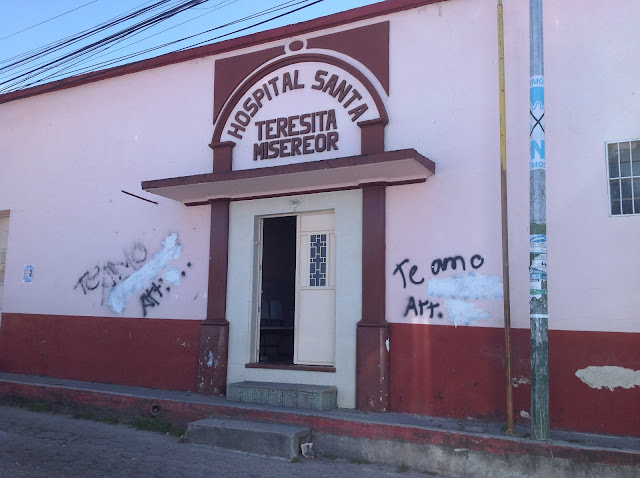 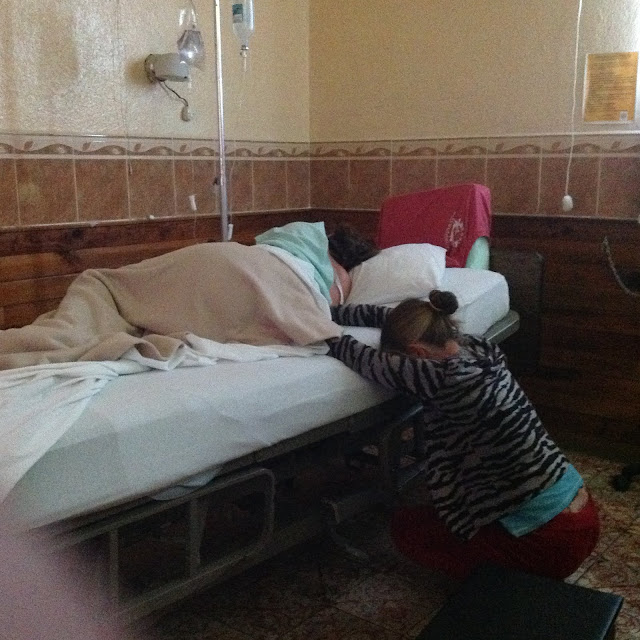 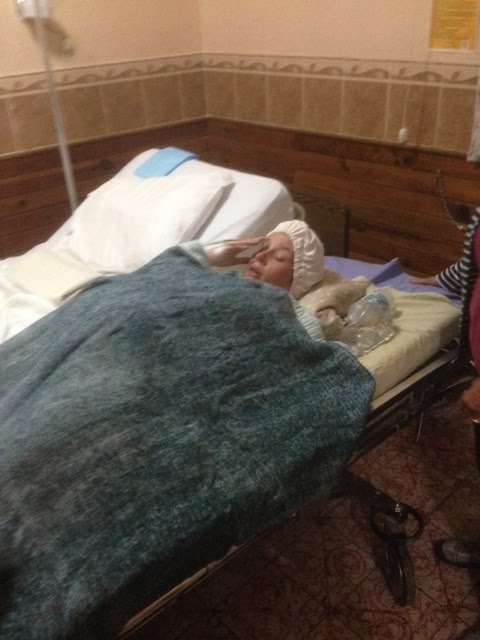 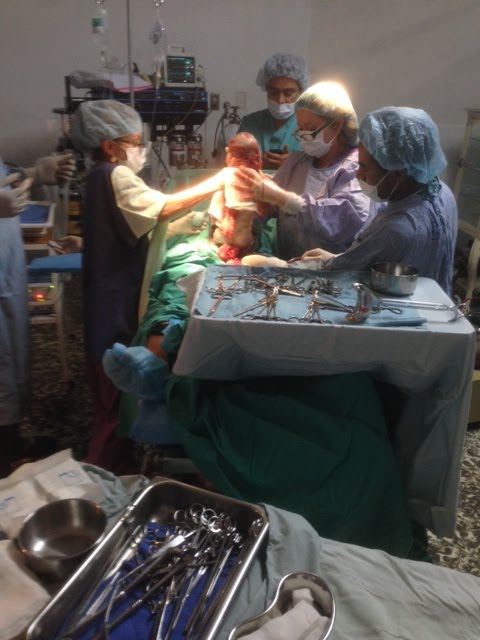 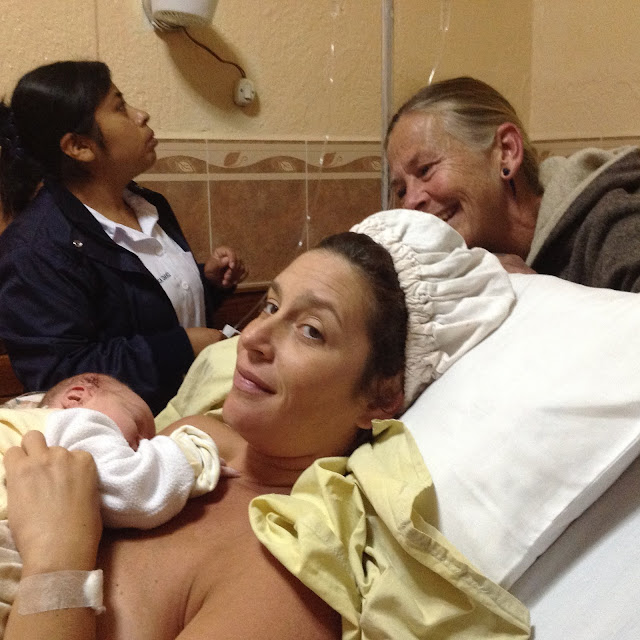 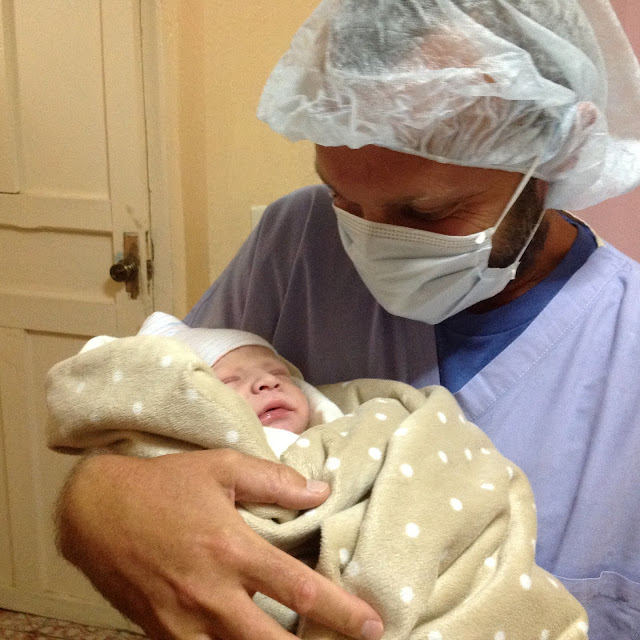 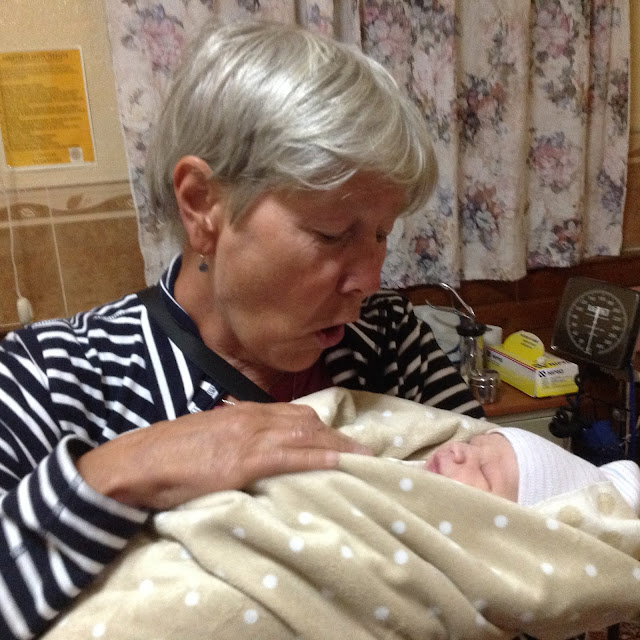 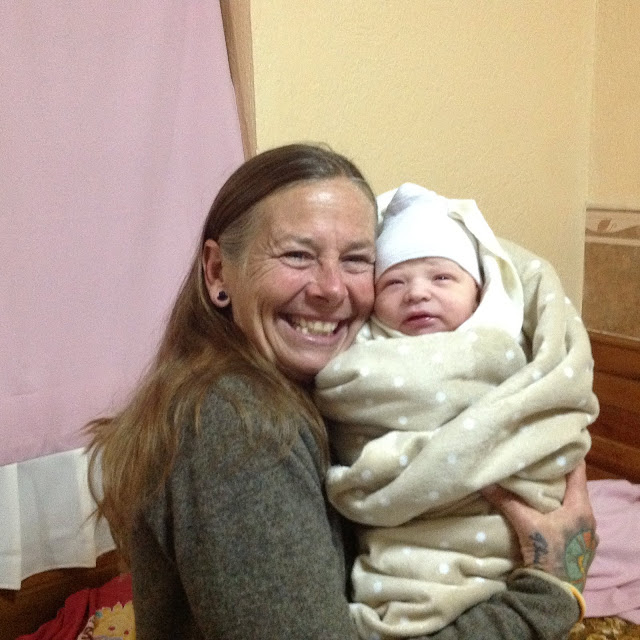 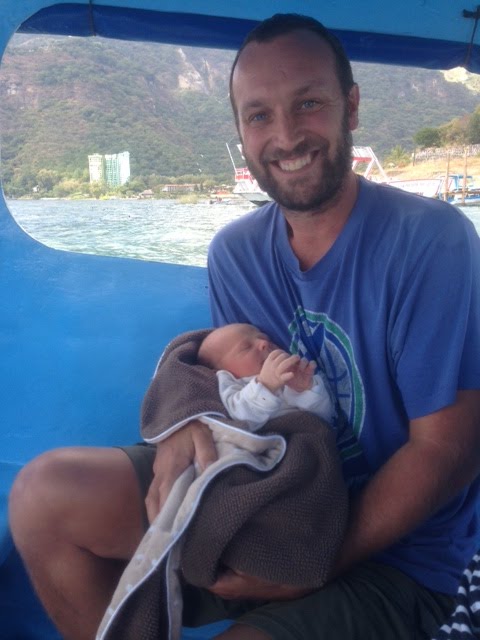 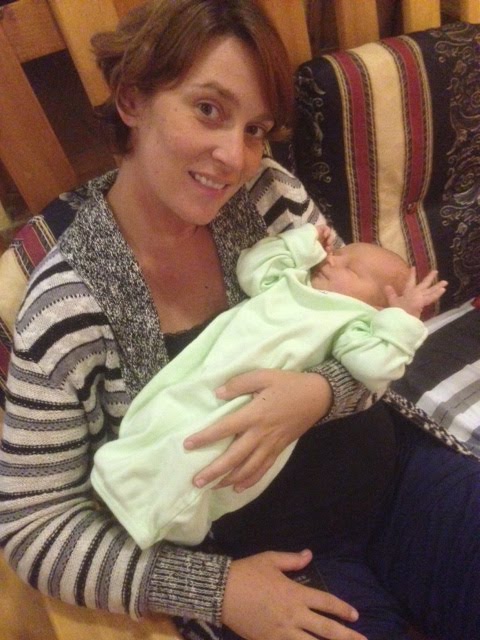 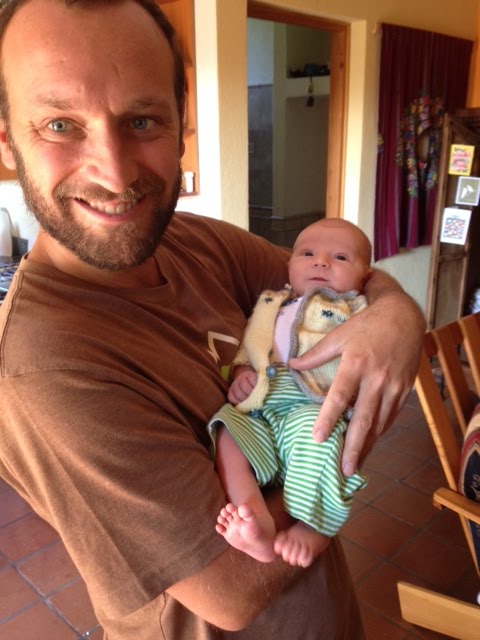 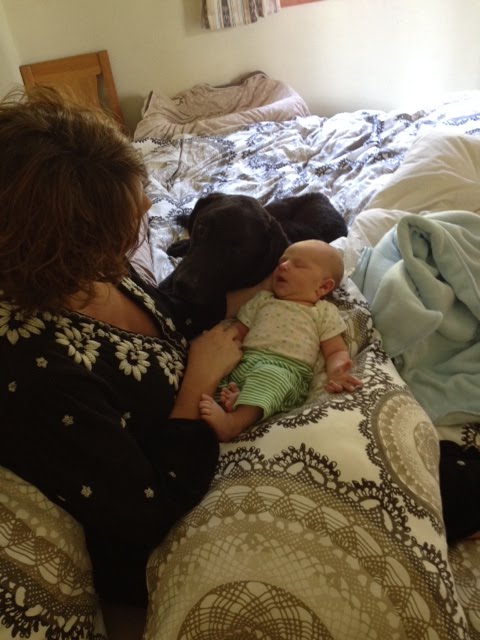 Still an incubator...4 days past the guess date.

So there is no baby here yet. We are all trying to pass the time until he decides he is ready. There have been a few days that I really just needed to do nothing but overall we have been getting out and showing Bobbie around. Remember that for us to get out I have to get into a usually very over crowded uncomfortable boat and ride for a minimum of 20 minutes to our destination where we then walk everywhere we want to go until we decide it is time to get back in the boat and head home.  I am pretty proud that at 40 week pregnant I was still getting on the boat. I thought I would be done with this by 36 weeks. 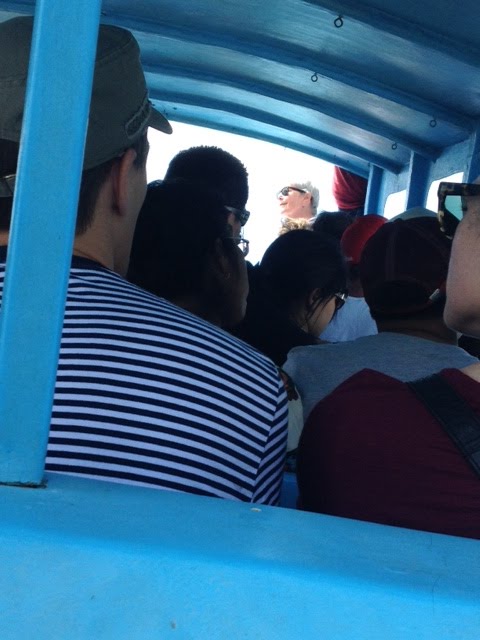 We spent Christmas day at our friend’s home. This required a hike but the view is really worth it! The dinner and company was fantastic. We had a southern style meal with fried chicken, greens, macaroni, ect. One of our friend’s who was also at the dinner shared with us that he has been building a boat and that he recently completed it. We are looking forward to his boat launch party next week when he puts it in the lake for the first time. 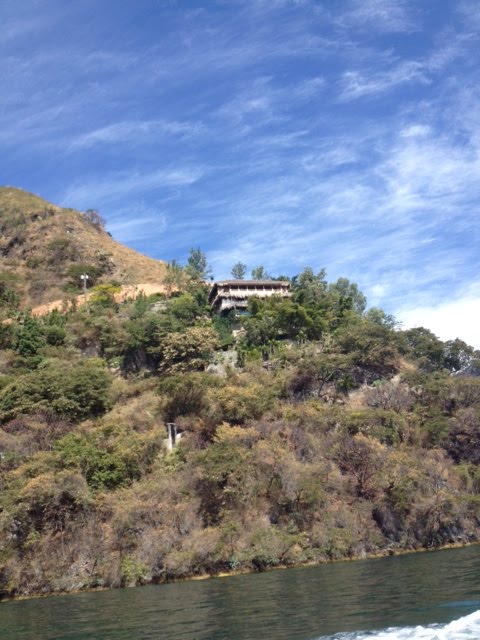 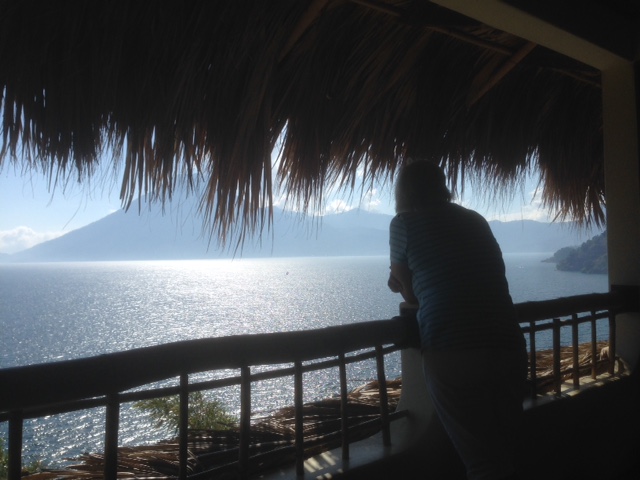 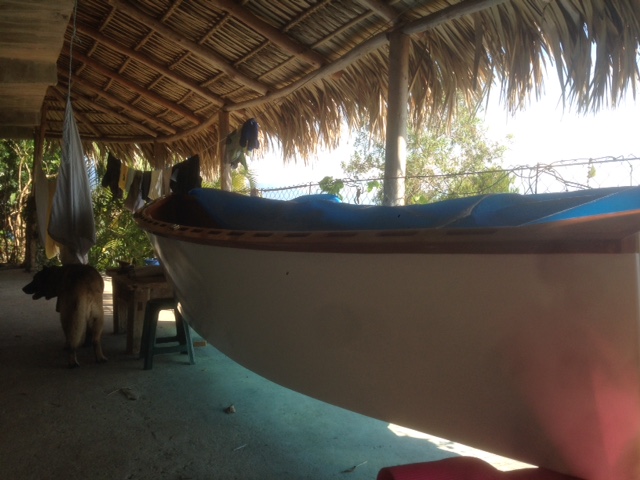 Another adventure was going to San Marcos. Bobbie took the plunge, twice! She thinks she “broke her butt” but really she probably bruised her tailbone. We also went to a hostel that LindaBlue told us had a microbrew on tap. She was right and Brandon was happy. 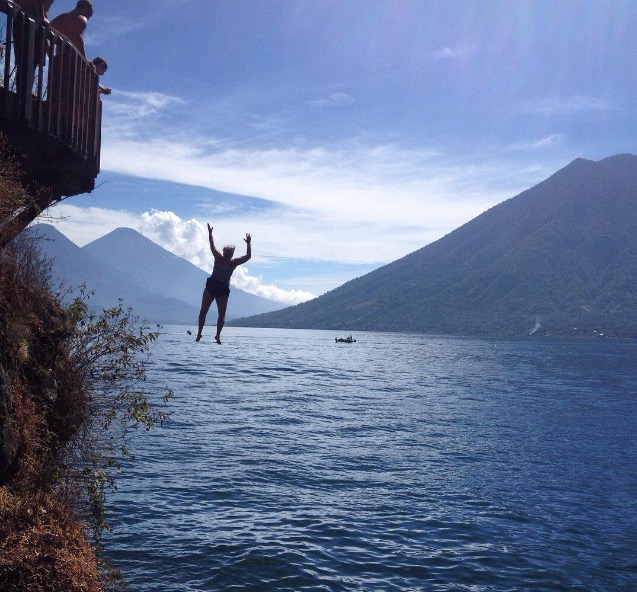 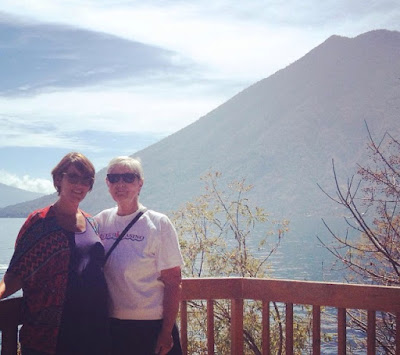 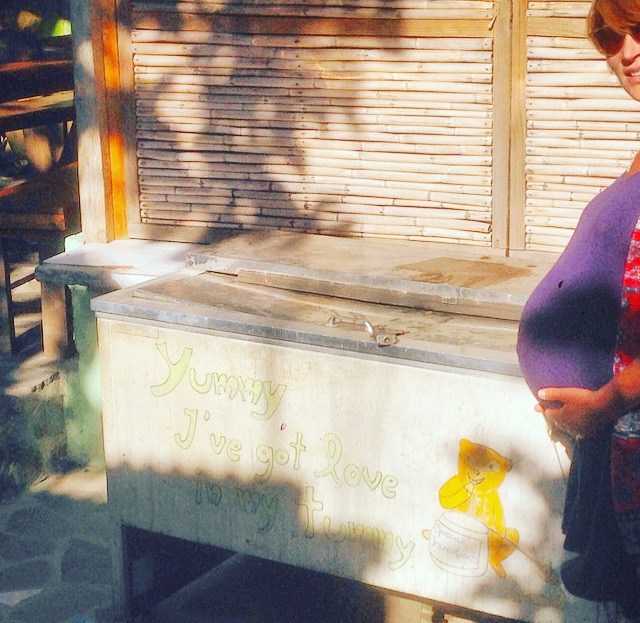 LindaBlue came for a prenatal visit on Saturday. Everything is still healthy and well. I have been having some mild and unpredictable contractions lately and Linda was fairly certain that they were going to increase throughout the day. She decided to spend the day with us rather than taking the boat home only to take the boat back. We walked up to Santa Cruz for lunch at Cecap. It was a very nice and long lunch but no signs that the baby was going to make an appearance so we parted ways after lunch. 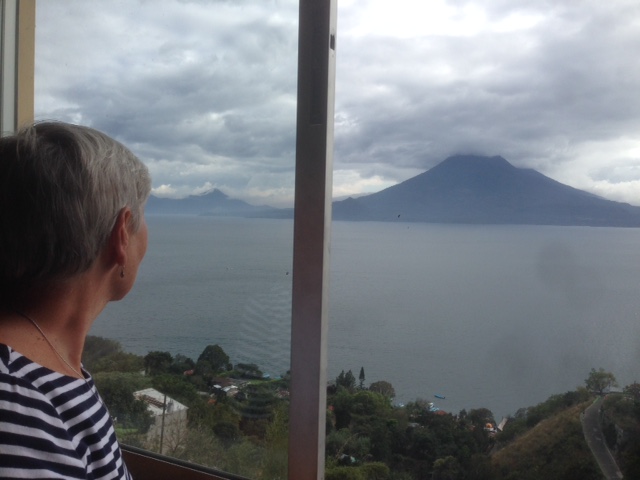 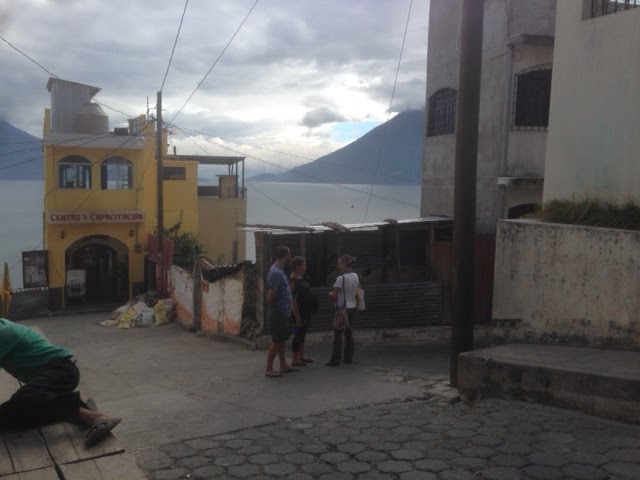 We are really enjoying my mom’s visit. We have been playing lots of Hand and Foot (her favorite card game) and overall just spending time together. She loves Guatemala, which is great! Remember that you are all welcome to come visit! 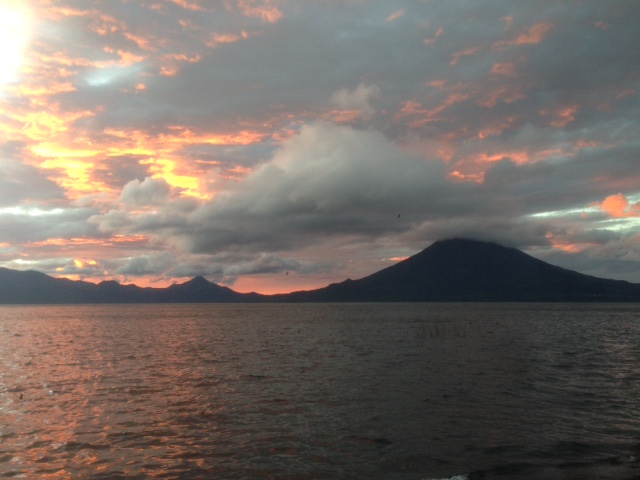 We will keep you posted on the arrival of the baby.
XOXO,


Katie, Brandon, and Bobbie
Posted by BeginAgain at 7:34 AM No comments: